Important GK questions of 2021| for all competitive Exams 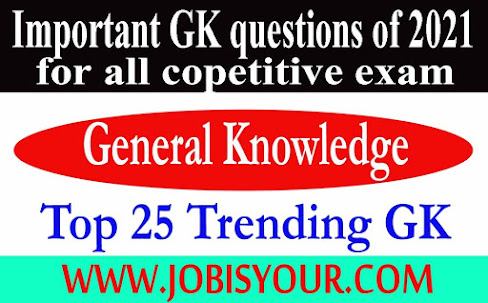 Top  25 most important GK Questions (General -Knowledge) for all competitive Exams in India. It is based on SSC/ UPSC/ APSC/PCS/Railway etc Exam pattern –

Important GK questions of 2021 for all competitive Exams –

3. The State which stands first in software exports from India?

4. Panchayats were given constitutional status by the ………….. amendment to the Constitution?

5. Who was the first Indian Soldier to refuse to use the greased cartridge?

7. Who is the first Indian to have won a Gold Medal?

8. The world`s most important renewable energy resource is ……….?

9. Which energy comes from Sun?

11. Earth is Protected from ultra-violet radiation by means of …………?

13. Who spoke in Hindi for the first time in the UNP general Assembly?

14. The largest number of cotton weaving mills are located in ……..?

15. What was the name accorded to the Military Operation in Kargil in 1999?

16. What is the date of Army Day Celebrating in India?

17. Which mission of NASA brought the first human to the moon?

18. Name the first Spacecraft to visit the Solar System?

20. Which place is known as the roof of the world?

21. Which is the densest jungle in the world?

22. Which country is called the land of the rising sun?

23. Who is the inventor of electricity?

24. Which is the largest ocean in the world?

25. Who won the first Olympic medal in wrestling for India?