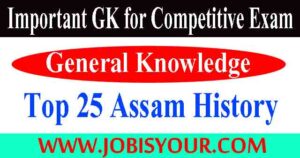 1. Which Year Assam was completely annexed into the British empire?

2. Which century was Muslim first came to Assam?

3. The Bodoland Territorial Council was established in?

4. Who is the Founder of Assam?

5. Who was the first Assamese to get “the Arjuna Award”?

6. The First non-government college of Assam?

8. Which city is also known as “The Culture Capital of Assam”?

10. Who was the first Freedom Fighter of Assam?

11. Moamoria rebellion continues for how many years?

13. What was the Capital of the Kachari Kingdom?

14. How many times the Ahom defeated the Mughals?

15. Who had designed the paik system in the Ahom Kingdom?

16. Which is the tallest Temple in Assam?

18. How many years Ahom Kingdom ruled in Assam?

19. Who had Discovered Tea Plants in Assam?

20. Who lead the first revolt against the British in Assam?

21. Who was the first Assamese Governor of an Indian State?

22. Who was the first Europeans came to India?

25. Who is the first speaker of the Assam Assembly?